Here are the chip counts, seats and players names

Richard eliminated in 10th position holding A6 versus AK 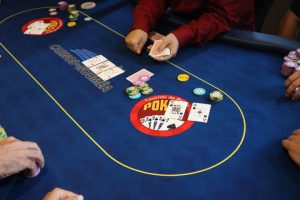 With a shove from the Richard on the button at seat 10 Minh was able to make any easy call from the small blind with AK.

Clean board and run out and we lost the first player from this final table.

Apologies for the focus, or lack there of, this was another pre flop shove this time Kevin in seat 2 holding AQ called by David in Seat 4 with AJ.

A window Jack put David out in front and that is where he stayed – eliminating a player – and then there were eight.

A three way all-in pre flop between David (AJ), Nicolas (K5) and Andre (QJ) – Nicolas spiked a King on the flop to go into first place and stayed there, tripling his stack and eliminating a player.

There are a lot of photo’s for this elimination as well as four starting hands and two boards and this is because it happened over the course of two hands between the same two players.

David shoves his stack in pre-flop and Casey goes into the tank from the Big blind – he finds a call and it was the correct decision, the cards were turned over and David was behind, in a big way:-

The battle is on again! I think Casey shoved over the top of a raise by David who called for the extra chips

Casey is in great shape, again, to add some needed chips to his stack if he is going to stay alive and have a shot at winning this tournament. However …

The board 5d 4h Jh 9s 4d would seal his fate and Casey departed stage left finishing 7th in this tournament. He won event number one and has made another final table in only event number three, I think we may see more of him in this series.

Gerard eliminated in 6th position holding A3 versus 77

David running like God! Gerard pushes his stack in and is called off by David with 77

Clean board as you can see – and then there were 5!

Another battle pre-flop for all of it!

Laurent picks up some much needed chips!

Tran eliminated in 4th position holding A4 versus QQ

Let’s get it in pre-flop – Tran shoves and David “i don’t run bad” looks down at a pair of queens on the button! Very easy call – Happy Birthday David – some more chips for your tower!

This was an interesting hand – for the first time all the chips went in on the river – not pre flop!

This was a battle of small blind versus big blind, Emmanuel limps from the small blind and Laurent checks his option.

Emmanuel checks and laurent checks back

Emmanuel shoves all in and Laurent ‘snap calls (immediately)’ and turns over the made flush on the river – and that is that for Emmanuel.

The chip lead never left David’s Ninja like grip, there was some all-in/fold moments for both … that is until Laurent decided to shove “any Ace” and got it in pre flop with A 9 – another easy call for David with A Q !!

Clean board – game over – we have a champion and his name is David – he over came a table of Goliaths. David went to the final table as the fourth shortest stack holding only 61,000 and overcame all the odds against the short stacks and like the Phoenix he rose from the ashes!!!

Congrats David you are a worthy champion and the winner of event number 3 at the NCPO 2017.

About The Poker P.I